WHY OUR SECRET GRADING SYSTEMS ARE NOT WORKING...and what we can do to fix the problem.

Australia’s MSA is the best grading system in the world and MSA graded cuts attract a price premium. But Australia has failed to develop a whole of market grading system that accurately describes eating quality to consumers.

Some of the better beef is MSA graded and some of the old cow beef is labelled Budget. But most beef sold to Australian consumers is not graded and consumers buy a good steak one day and a bad steak the next.

Most consumers have never heard of MSA and do not know that Budget Beef means beef from old animals.

Beef is generally retailed as a commodity and the price of the bad steak brings down the price of the good. Consumers do not know how to tell the difference between the good steak and the bad, become dissatisfied and switch from beef to chicken or pork and beef consumption continues to fall.

In 1999 MLA introduced MSA grading to halt the Australian decline in demand for beef resulting from inconsistent eating quality.

In 2001 major beef retailers signed up to a Voluntary Retail Agreement to describe beef from animals with eight teeth as “Budget”.

Trend Decline
The MSA 1998 Business Plan noted that per capita beef consumption was on a long-term trend decline of about 1.7% per year (see chart, How did MSA begin?). 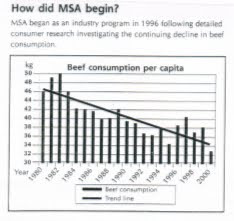 Continued Trend Decline
The per capita consumption trend decline between 1999 and 2009 was about 1.76% per year. The trend decline which laid the foundation for the development of MSA has therefore continued at the same rate since the introduction of MSA 11 years ago (see chart, Australian Beef Consumption Since MSA). 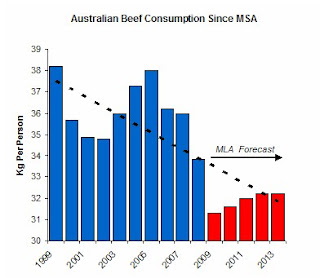 
The MSA Strategy
“Two of the strategic imperatives of the 1996 Meat Industry Strategic Plan (MISP) were to:
The MISP concluded this would result in an annual $1.2 billion payout to the Australian beef industry by 2010.

The Meat Standards Australia Business Plan December 1998 stated that there were two reasons for introducing MSA:
The 1998 MSA Business Plan stated that “a strategy for expanding a whole of market grading system must be developed”.

So what went wrong?
Australia has failed to develop a whole of market Grading System.

The Australian Branded Beef Association told the Senate Standing Committee on Rural and Regional Affairs and Transport Inquiry into Meat Marketing that:

“Australia (has) the world’s leading grading system in Meat Standards Australia (MSA); however nothing is perfect and MSA only describes the product that meets its requirements. We believe that we need a system that accounts for and describes the entire product.

Therefore we (the Australian Branded Beef Association) support the Bindaree position on a National Grading System provided that it incorporated the current MSA system/technology for the product that meets the MSA specifications and then ascribed grades/descriptions to the product that does not meet MSA requirements.”

Last year only 20% - 25% of beef sold on the domestic market was MSA graded and less than half the retailers in Australia are signatories to the Voluntary Retail Agreement which requires signatories to describe beef from eight tooth animals as “Budget”.


Secrecy and Misdescription
Most consumers have never heard of MSA and don’t know that “Budget” beef means beef from older animals.

The Senate Standing Committee on Rural and Regional Affairs and Transport Inquiry into Meat Marketing report:
The Solution
A National Beef Grading System that grades all the product sold to Australian consumers.
Richard Torbay’s Beef Grading Bill which is before the NSW Parliament contemplates a National Voluntary Beef Grading Code underpinned by legislation which will impose potential penalties on any retailer who adopts the Code and then cheats by mis-describing beef as being a certain grade when it does not meet the standards for that grade.

Richard Torbay’s proposed National Beef Grading Code embraces MSA and recognises the general improvement in beef eating quality in recent years but, if adopted, will apply to all the beef products sold on the domestic market, not just MSA graded products and Budget beef.

Under the proposed legislation if a retailer purchased beef from an AUS-MEAT accredited abattoir labelled, for instance, PRS (up to 42 months old) and sold it to their customers as yearling, they would be subject to substantial fines.

Similarly, if a retailer purchased beef from an AUS-MEAT accredited abattoir labelled “Budget” and sold it to his customers under a label that did not include the word “Budget” that retailer would be subject to substantial penalty.

If all the beef is graded consumers will know the quality of the product before they buy and will no longer have to enter into the lottery of getting good steak one day and bad steak the next. This will lead to an increase in per capita beef consumption and good quality beef and cattle will attract the premium price they deserve. The potential payout to the beef industry will be well over $1Bn a year.


Truth in Labelling
If those retailers that are signatories to the Budget Beef Voluntary Retail Agreement really intended to label beef from animals with eight teeth as “Budget” in their shops it is difficult to understand why they would object to that Voluntary Retail Agreement being underpinned by legislation which imposed a penalty if the retailer cheated and failed to disclose to their customers that the beef came from older animals.

If retailers did not breach the Agreement no penalties would apply.
To find out about:
CLICK HERE
To print this article (PDF):

AMPG Submission to Productivity Commission's Inquiry into Regulation of Agriculture

The Australian Meat Producers Group ('AMPG') have made a submission to the Productivity Commission's Inquiry into Regulation o...

Norman Hunt is the founder of Hunt Partners Lawyers Pty Ltd, a law firm which specialises in rural industry advocacy and reform. Hunt Partners have represented and advocated on behalf of rural businesses, private interest groups and industry bodies for over 25 years. HuntBlog is a forum for discussion of important issues relevant to the rural sector and provides background to current news events, encompassing public and private, legal and commercial, domestic and international perspectives.
For more information about Norman Hunt or Hunt Partners visit: www.huntpartners.com.au
Or email Norman at: huntpartners@bigpond.com

King, S. (2013) 'FactCheck: Do Coles and Woolies control 80% of the market?', The Conversation, available at https://theconversation.com/factcheck-do-coles-and-woolies-control-80-of-the-market-15418